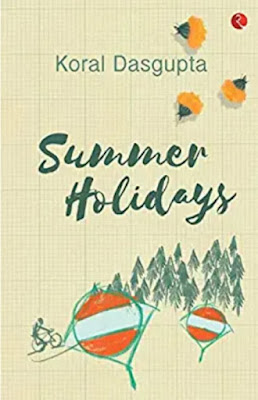 “Some sentiments are personal. They are deep and impassioned. They expose the raw, unfabricated feelings of the heart so ruthlessly that it feels naked.”  (Page 223)

To a writer, a review is not just about praise or criticism. The unimagined and never thought of perceptions that reviews bring out, which sometimes, even the creator of the story hasn’t touched upon are more valuable to a writer.

While reading ‘SUMMER HOLIDAYS’ I was wondering how challenging it was to write this story. For me, it would have been too difficult to write such a story. I was gobsmacked, mesmerised and in awe of the authoress. In an era when everyone writes either a Romance or a Thriller, someone chooses to write about families, siblings, and relations. And, it’s not just a naive attempt but a masterpiece. I reckon this book will soon be in the curriculum for the students pursuing literature. This is the story that I would call ‘Real Fiction’.

I have great respect for the people who respect relations. Our relations are our strength. They are the people God wanted to be in our lives. Our relatives are the people who love us in spite of knowing all our shortcomings. Their unconditional love brightens up our lives. We may not hear from them for months even then, we live with the assurance that we can bank upon them in the hour of need. The belief that some people are just a call away and will come to our aid no matter what the circumstances are makes us face all challenges life throws at us. A rift, small disagreements, trivial arguments, random quarrels should not cut off the divine bond that binds us. Our lives will always suffer and feel the lack of cheerfulness if we shove them out of the sphere, they are naturally an inseparable part of.

This story has touched me, stirred my emotions, wetted my eyes many times and for a change, made me a slow reader- I sipped it rather than gulping that I normally do. This book is a ‘Research Material.’

“When you don’t water your plants, they die.” This, Major Dhillon says about relations.

Narrated in an uncomplicated third person, the story begins with a rift between parentless siblings- a brother and a sister, that distances them for years but another pair of siblings-their kids, eventually bring them together again.

The protagonist, Rishi is a real artist. The way he treats Meera stirred the brother in me. He is protective but wants her to transform the small-town-introvert-maiden in her into a confident woman who flaunts her goodness. How great it is that a brother tells his sister that ‘She makes heads turn’. The teasing remarks he passes to his sister takes you back to your childhood.

“Someone seems to have made peace with tattoos.”

The manner, in which Koral Dasgupta describes the artwork, shows her artisanal skills. I could see the picture that Viyaan buys and the sketch of the boy sitting under the banyan tree in front of the tea-stall.
I love the way he warns Viyaan Iyer, his employer against flirting with his sister. And, the way he snubs the taxi driver when he Meera reaches Mumbai. And, how he sweetly he treats Shabnam. Girls, do read this book and you will fall in love with Rishi.

Meera impresses as a motherless girl and a daughter of a disciplined Army officer. I love her no-prejudice-demeanour towards his father. Daughters are always so accommodating and understanding. I admire the efforts she put in to understand her brother, Rishi.

Major General Anil Dhillon is a stereotype army officer, disciplined, egoist and suppressor of emotions. He impresses towards the end when he accepts the imposter Rahul Pandey as his daughter’s suitor although he disliked his habits. That’s what a father is.

Viyaan Iyer appears rude. Despite his magnanimous personality, I worried about Meera whenever she meets him.

Deepti Bua is all right though, I felt that the author could have shown her thinking about her brother and niece a few times.

What a man Sharat Bahl is! A brilliantly drawn character blessed to have inherited the author’s great sense of humour. A perfect English literature professor. I had instant respect for him when he says, “In a few days he will see his dreams come to life. He will be able to touch it. Can anyone be richer than that?”
And when he says to Meera, “Usually it’s my wife who stands there staring at that photograph. I had just started to rejoice that she had suddenly grown young. Tough luck.”

And, the wife, Deepti Bua refuses to hold back.

“You can trust English Professors to be desperate.”

The ever-enigmatic and infamous Husband-Wife equation has been realistically expressed.

“Just check whether there are chilli flakes in the tea”

“You do all kinds of strange things and I have to hear about it for months after……… Why should I face the music for someone else’s strange habits?”     (Page 133 is fantastic)

We wonder how strange things manage to find only us. This is the kind of story that will bring solace to our distress of being cursed. When an author writes about the things you thought happened to you only, a sense of relief embarks upon you that you are not alone.

There is philosophy even in the humour. The comparison that the author draws between a Physics lecturer wife and an English-literature-professor husband is thought-provoking- She looked older than her age while he looked the same.

Shiraz, a mere gardener, the non-participant and yet very much part of the story is the author’s most favourite. Why, she tells in the acknowledgements. Shiraz never does anything wrong. He is the only one, Rishi has no complaints about. Shiraz is an unflawed human being. He grows beautiful marigolds. He talks to them. Rishi is so smitten by Shiraz that he finds his daughter the most perfect girl.
Shiraz would turn everything into an enchanting story.
He composes folk songs. Everything beautiful nature has, manifests in his songs. A lover of mankind is always a lover of nature though it may not be the other way around. Shiraz dies of snakebite.

“The ugliness is an illusion…You have to see through it to reach the real beauty…” Shiraz says.

The vain comparison between Virat Kohli and Sachin Tendulkar irks the cricket-fanatic in me.

And, not forgetting Kunj Bihari ji, the mouthpiece of wisdom, I strongly feel, he exists somewhere if not at IIT Mumbai. He exists and the author has studied him closely for she has written this character with remarkable precision.

Page number 239 to 243, I read with tears in my eyes despite the author’s spirited efforts of balancing emotions with humour. Let me tell you Koral Dasgupta, your brilliance failed here.

SUMMER HOLIDAYS is the kind of book on which I can write a thesis. It’s a book I can read again and again.
But, I am weird. Ending this write-up without criticism will disturb my digestion. A question I asked the writer in me after I finished reading SUMMER HOLIDAYS, why do we writers bring in characters, use them to our advantage and then discard them. I felt sorry for Professor Shayan Banerjee. Why was he in the story? And, the little boy who sold incense sticks on the road, who meets Rishi, rides on his bike, imparts a piece of valuable advice and perishes. Just one appearance?

I maintain that the way someone writes shows the way he or she lives. Only a person who values his relations could have written such a fabulous story. SUMMER HOLIDAYS will always remain alive in my memory. Beautiful story it is!

Do read this if you love your siblings and value your relations. 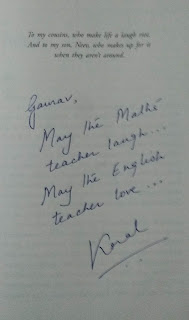 Thanks for your invaluable perception.

Zelensky – The Villain in Putin’s War It’s been more than a fortnight since the weak but brave Ukraine is facing the ire of the stubborn P...

Gaurav Sharma is a freelance Mathematics teacher. Writing is his passion. His first novel is ‘LOVE @ AIR FORCE’ which is a bildungsroman literary novel, brought out by Blackbuck Publications.

He also contributed a poem in ‘THE ESSENCE OF ETERNAL HAPPINESS’ which is a collection of poems from 29 poets from six countries.

Lunacy for his dreams, he claims, has helped him being a published writer. As a writer, he doesn’t want to be just a storyteller but yearns to create a stir.